Where the Poppies Blow

We will remember them.

To commemorate the fallen, millions of ceramic poppies are being displayed in the moat around the Tower of London. 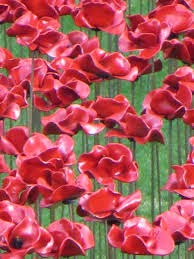 The humble poppy is widely recognised as an international symbol of remembrance. Soldiers first associated the blood-coloured flower with war when they saw it in huge numbers, covering the battle-scarred fields of Flanders and growing on broken ground, which is, of course, where poppies grow best.

IN FLANDERS FIELDS
John McCrae (Inspired by the death of a Canadian officer close to the Advanced Dressing Station which was a concrete bunker on the battlefield.)

On May 2nd, 1915 news reached him that his friend and protege, Lieut Alexis Helmer, had been blasted to pieces by an eight-inch Howitzer shell. It was this experience that prompted McCrae to write these poignant words:

"In Flanders Fields the poppies blow,
Between the crosses, row on row,
That mark our place and in the sky
The larks, still bravely singing, fly
Scarce heard amid the guns below.
We are the Dead. Short days ago
We lived, felt dawn, saw sunset glow,
Loved and were loved, and now we lie
In Flanders Fields.
Take up our quarrel with the foe;
To you from falling hands we throw
The torch; be yours to hold it high.
If ye break faith with us who die
We shall not sleep, though poppies grow
In Flanders Fields."

This simple poem was an almost overnight success after publication in Punch magazine in December 1915.

Towards the end of the war, an American lady called Moira Michael wrote a poem in response, entitled "We Shall Keep the Faith". She exhorted readers to wear a poppy in honour of the dead. The secretary of the French YMCA, Madame Guerin, grasped this idea; she began selling artificial poppies to raise funds for soldiers and their families.

In the UK the concept was taken on by the Earl Haig fund and adopted by the newly formed British Legion as a symbol of remembrance of the dead and the missing, and as a means of raising funds for wounded and hard-pressed soldiers after the war. The first poppy day was held on November 11, 1921. 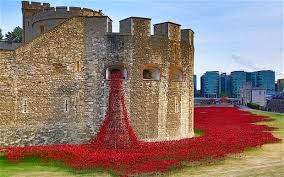 "Here on the slope of the hillside, lying
In the field here the corn waved, proud and free;
Here on the hill where manhood, dying,
Lost the sun, and the power to see,
They lost the years and the light and laughter,
And gained a peace we shall not know,
They lost the tears that shall come after,
And all the storms that yet shall blow.
And who shall say at the end of the day,
With the sunset shining clear,
That those who fell by the winding way,
In the peace and the quiet here,
Gained greater gifts than peace shall give,
Where only the soft winds blow,
And a better fate than those who live?
They have found peace where poppies grow." 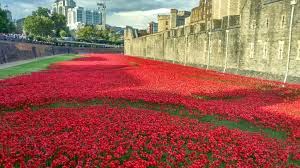 "Down the close, darkening lanes they sang their way
To the siding shed,
And lined the train with faces grimly gay.

Their breasts were struck all white with wreath and spray
As men's are, dead.

Dull porters watched them, and a casual tramp
Stood staring hard,
Sorry to miss them from the upland camp.
Then, unmoved, signals nodded, and a lamp
Winked to the guard.

So secretly, like wrongs hushed-up, they went.
They were not ours:
We never heard to which front these were sent.

Nor there if they yet mock what women meant
Who gave them flowers.

Shall they return to beatings of great bells
In wild train-loads?
A few, a few, too few for drums and yells,
May creep back, silent, to still village wells
Up half-known roads." 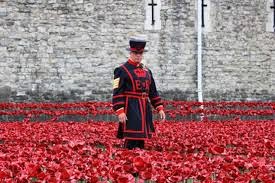 "At the going down of the sun, and in the morning, we will remember them." 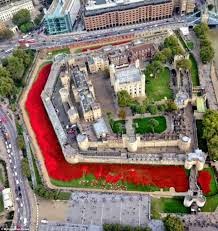